Our Progress in tackling child labor

Our goal is to source all cocoa for confectionery products from the Nestlé Cocoa Plan by 2025
Identify the challenges, engage with others and measure progress. We believe that addressing issues transparently is essential. In this light, we invite you to read our second report on ‘Tackling Child Labor’. We want to ensure that cocoa is sustainably grown, sourced and managed across our supply chain.

Our future is tied to the value we create for society. That is why we launched the Nestlé Cocoa Plan in 2009: to make cocoa farming more sustainable, improve the lives of farmers and enhance the quality of our products. We have invested CHF 224 million over the last 10 years to help make this a reality.

A key part of the Nestlé Cocoa Plan is addressing the issue of child labor. Child labor is unacceptable. Children should be protected and they deserve the chance to fulfill their potential. This is why we were the first company in the industry to introduce a comprehensive Child Labor Monitoring and Remediation System (CLMRS) in 2012.

Since 2017 the reach of the CLMRS has almost doubled –covering 78,580 children today. We are not proud to have found just over 18,000 children doing hazardous work, but thanks to our system, we have been able to make a difference in their lives.

While we have made progress, we will not stop here. This report describes how we are learning and adapting our approach with our partners. It also outlines our commitments to continue to raise awareness and expand the CLMRS to other communities.

Our goal is to source all cocoa for our confectionery products from the Nestlé Cocoa Plan by 2025. In parallel, we will continue to expand the reach of the CLMRS across our supply chain in West Africa. 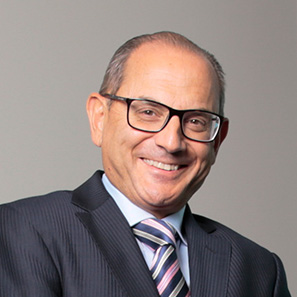 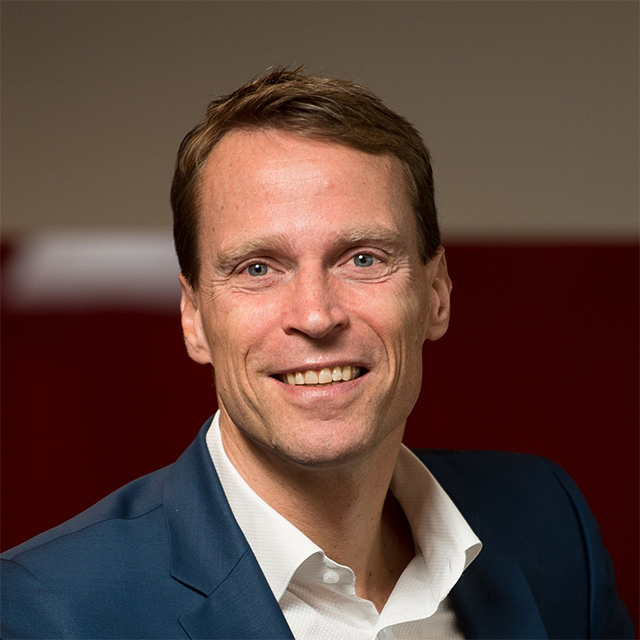 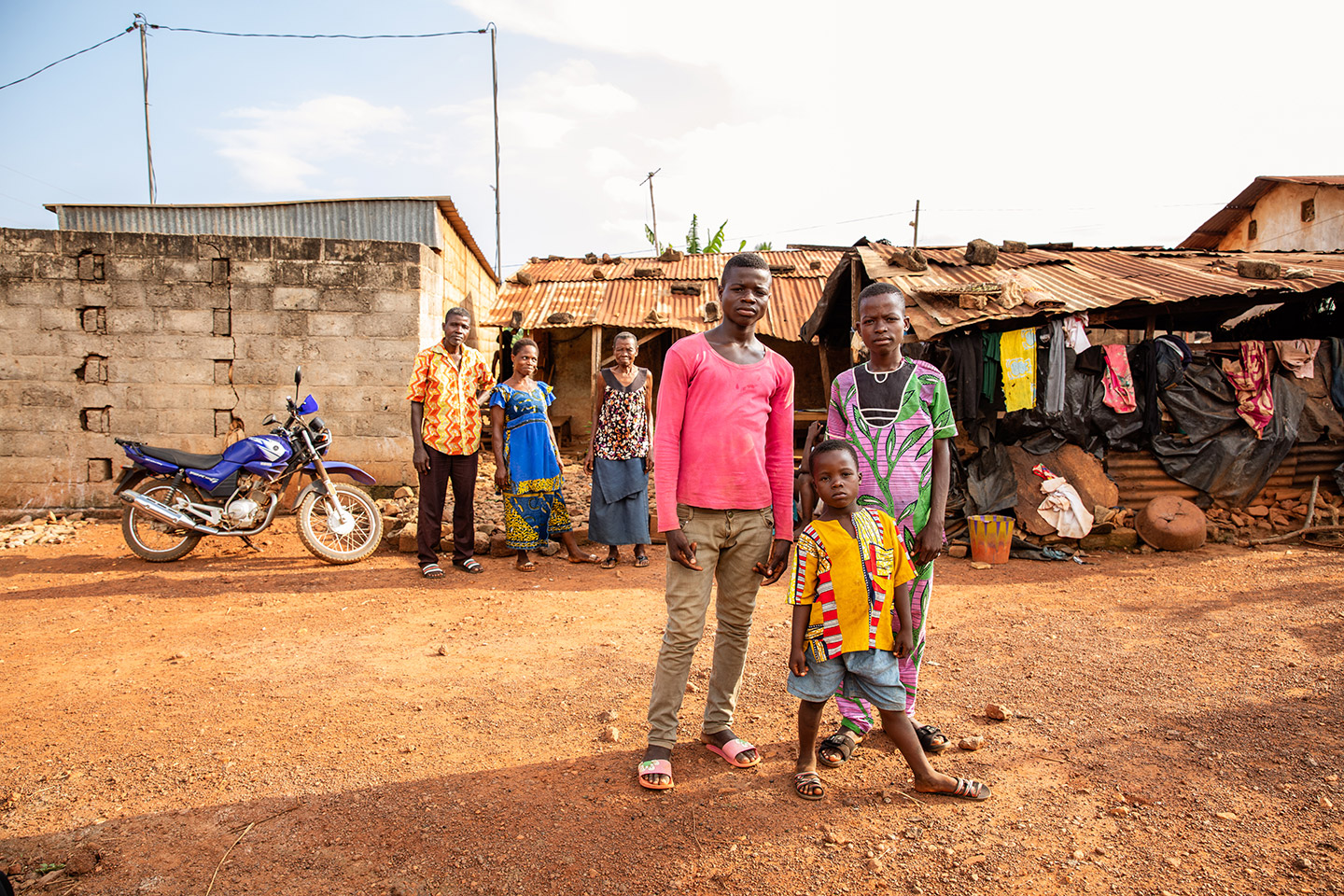 Increasing our scale and impact

Now present in over 1,750 communities in Côte d’Ivoire, our CLMRS database encompasses over 24,000 more farmers than in 2017 and almost double the number of children. Encouragingly, analysis of the data indicates that the system seems to be working as effectively at scale as it did during its development phase. 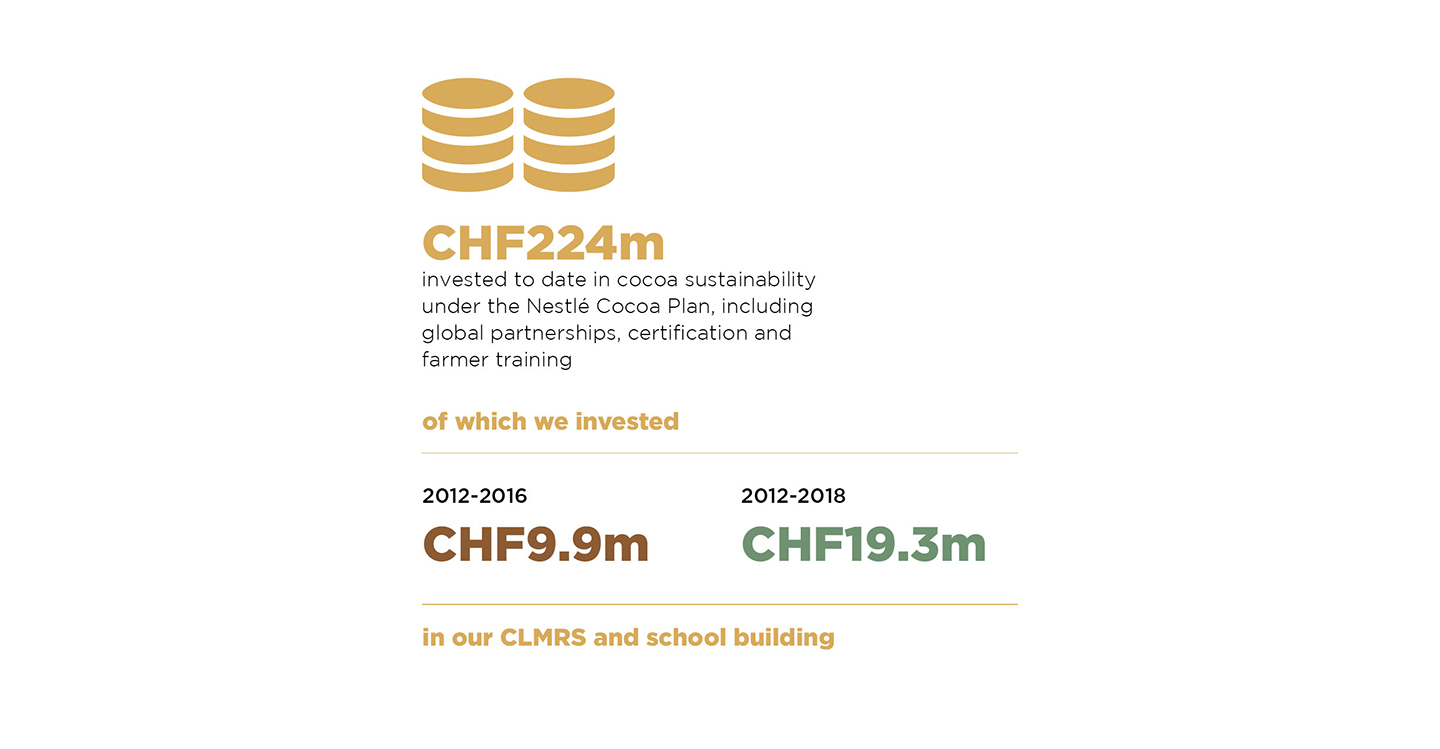 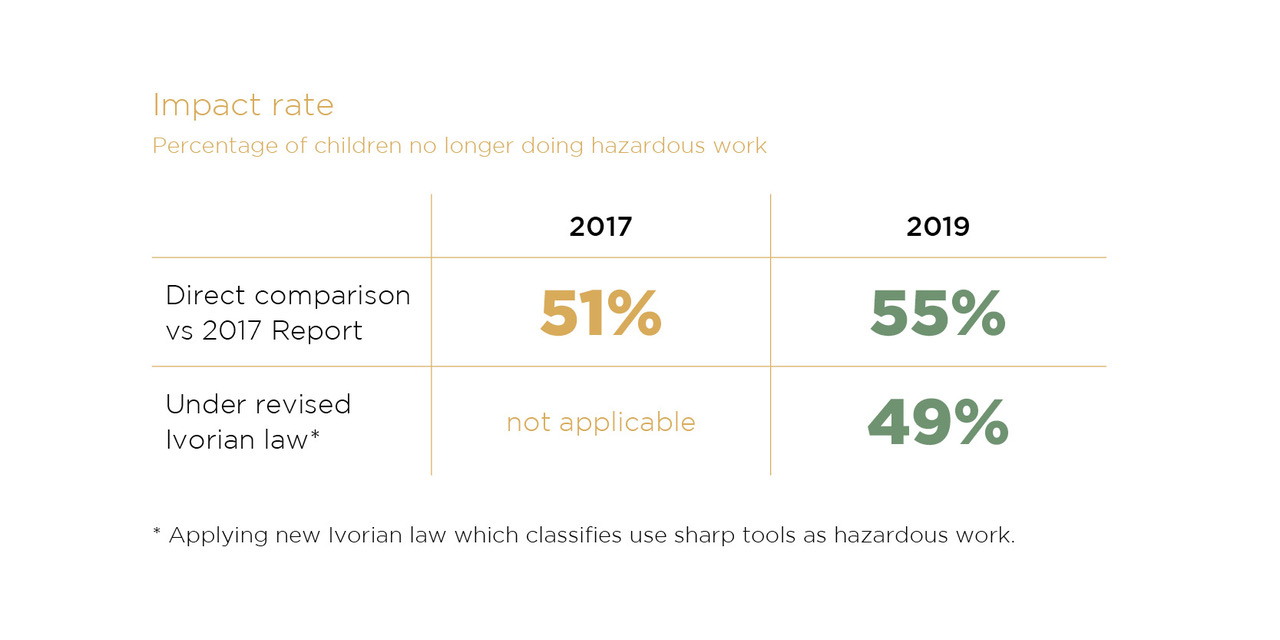 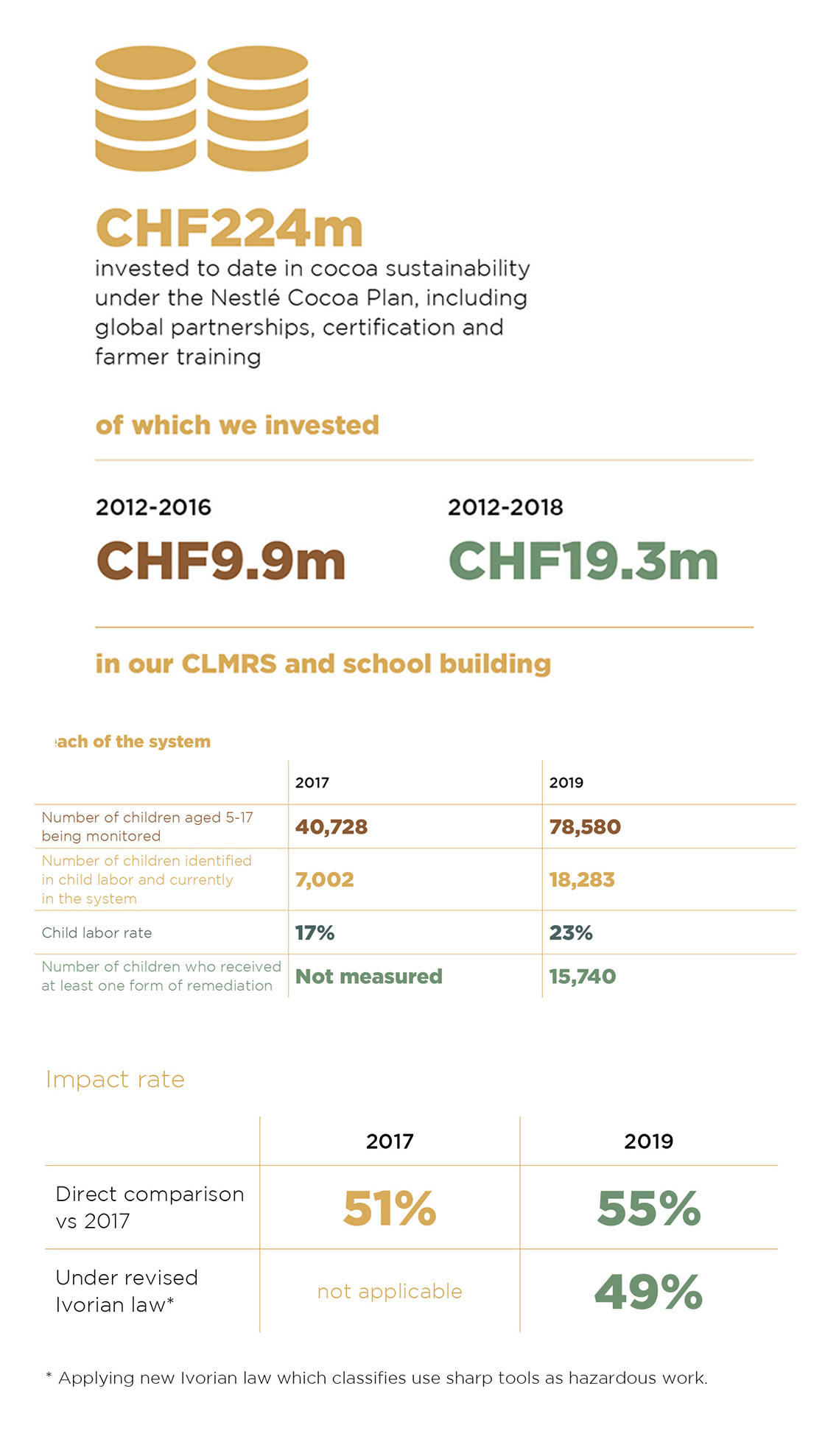 How the system works

Community-driven, holistic and embedded into the heart of our supply chain, the Nestlé Child Labor Monitoring and Remediation System is an effective way to approach the problem of child labor. This was the first program of its kind in the cocoa sector. 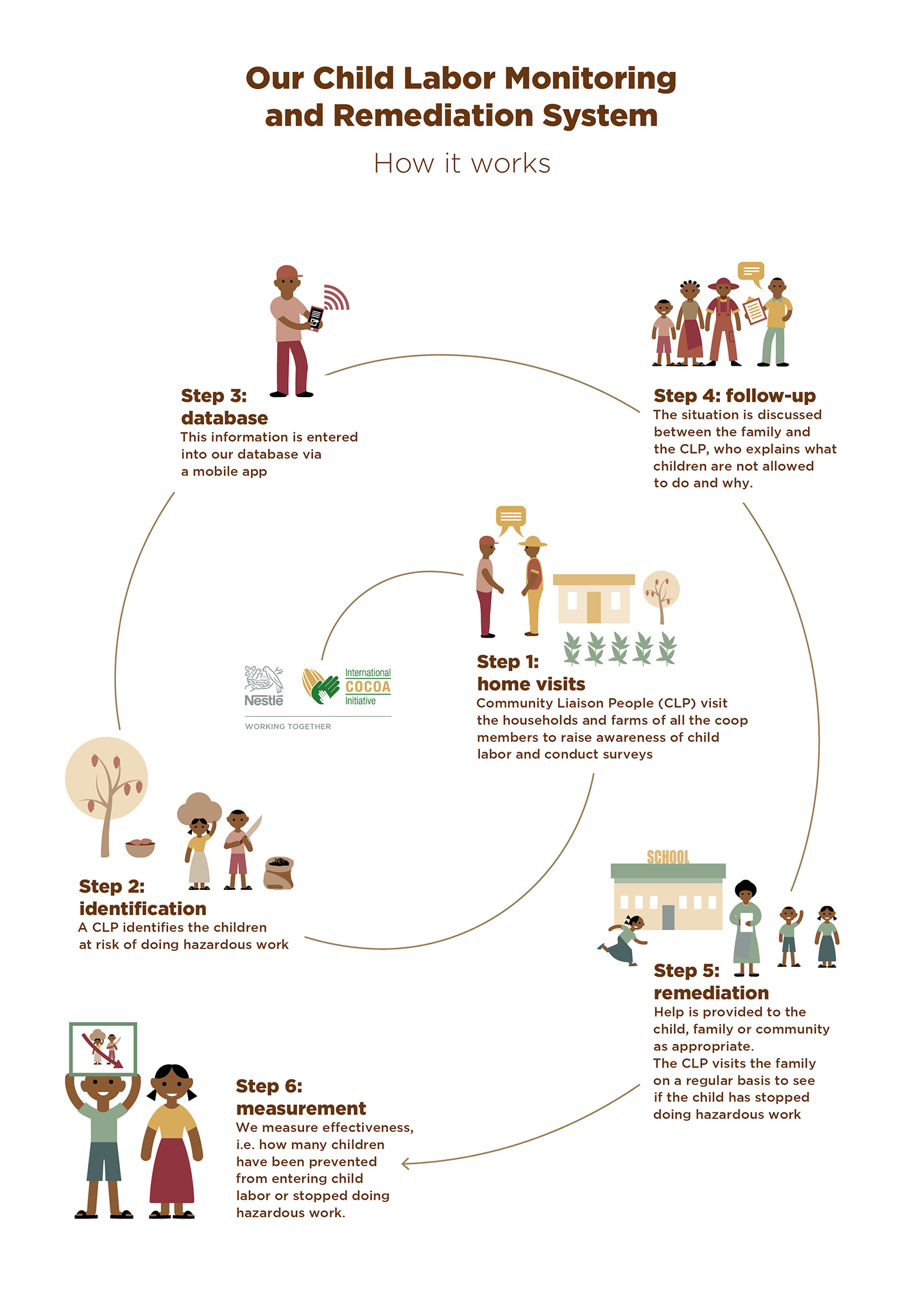 Since 2012, 593,925 attendees have taken part in our awareness-raising sessions. We have helped 87,925 children, both within and outside our direct supply chain. See below the main types of remediation activities delivered by our CLMRS. 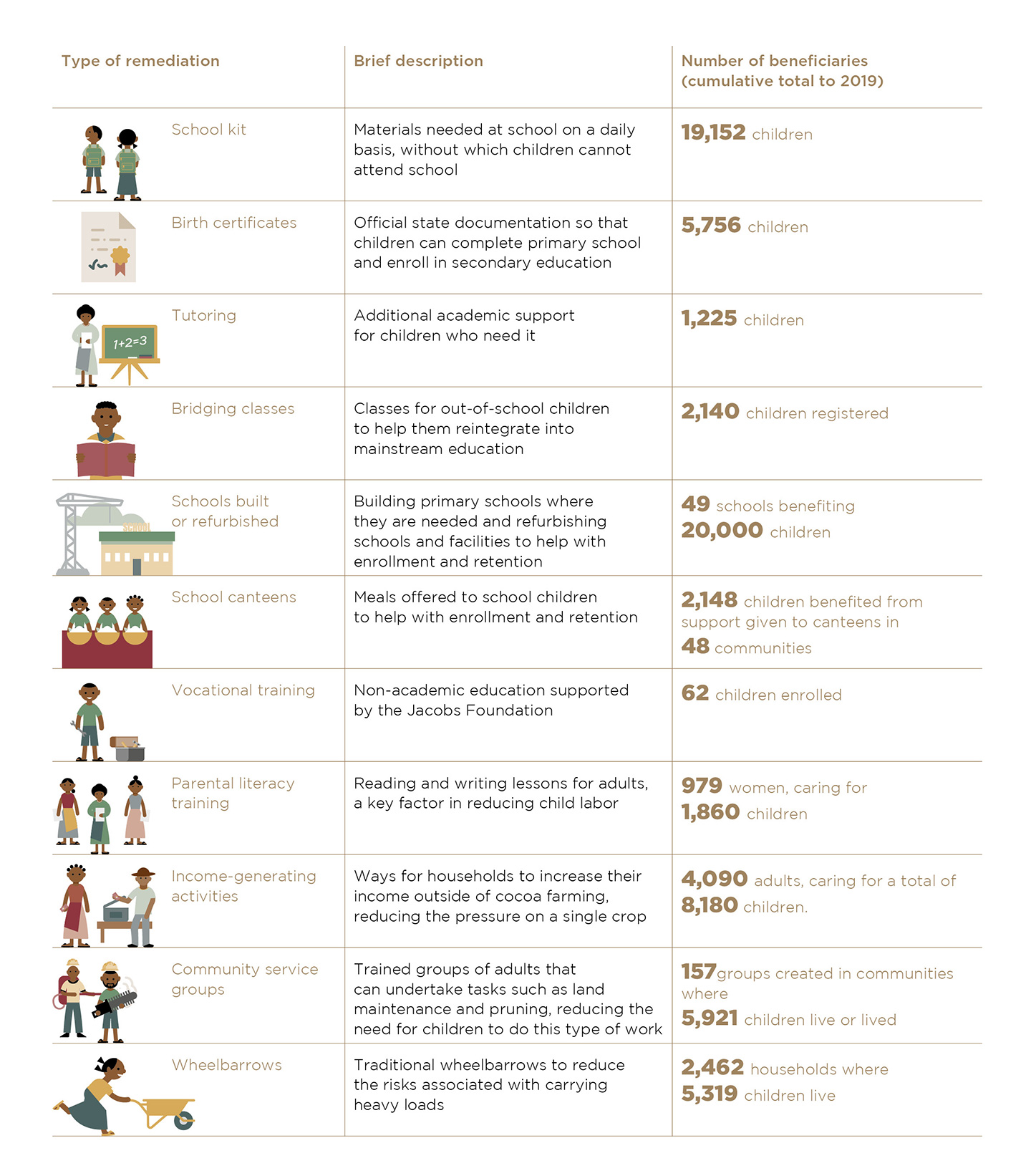 With our partners we help children enter or reintegrate into schools, so that they can fulfill their potential. Read about out approach here.

A bridge to mainstream education

Although good progress has been made, there are many challenges on the road to eliminating child labor. We explain some of these issues and how we approach them.

Challenges and setbacks along the way

The complexity of remediation

Give children a voice to help stop child labor

Collaboration is key to successful remediation. This year we have invited two leading voices in academic research to help understand child labor better.

By 2025, we aim to source 100% of our cocoa for our confectionery products through the Nestlé Cocoa Plan. A fundamental part of the Cocoa Plan in areas with a high risk of child labor is to implement the CLMRS. We will therefore implement the CLMRS across all of our sourcing in West Africa. This represents a major commitment to ensuring our chocolate is sustainable.